Pi Beta Phi Phoenix Alumnae Club was chartered on December 28, 1926, by a group of ten Pi Phi alumnae living in the Phoenix area. When Kappa Kappa Gamma Alumnae Association was chartered in 1928 the city of Phoenix census showed approximately 48,000 residents and the state itself was only “Sweet Sixteen”. Delta Gamma Phoenix Alumnae Association began in 1938. Gamma Phi Beta and Alpha Delta Pi formed their Phoenix alumnae groups in 1939. Six Phoenix alumnae groups were chartered in the 1940's: Alpha Phi in 1941, Delta Zeta, Kappa Delta and Sigma Kappa in 1948, and Alpha Chi Omega and Alpha Xi Delta in 1949.

In 1952 The Phoenix Gazette reported that Phoenix Panhellenic represented 1000 women from 23 National sororities. According to the article each year Panhellenic planned two general meetings--a luncheon fashion show in late October and another luncheon in the Spring. The major focus that year was assistance to the newly established National sororities on the campus at Arizona State in Tempe. In November they held a bridge tournament to furnish the recreation room and kitchen in the housing at ASU according to President Mrs. James Henderson, Gamma Phi Beta. They also held a Christmas Open House and a annual benefit ball in the Spring. Panhellenic at that time maintained a scholarship loan fund from which local girls could borrow, interest free, to help finance their education.

Other Phoenix alumnae group charters are Alpha Omicron Pi in 1950, Delta Delta Delta in 1952, Sigma Sigma Sigma in 1953 and Zeta Tau Alpha in 1954. Kappa Alpha Theta members had formed a Theta Club in 1922, but did not petition headquarters until 1960 to become a Theta Alumnae Chapter, partially to support the new collegiate chapter at Arizona State University. Chi Omega was chartered in 1974 and Phi Mu in 2007. Delta Phi Epsilon alumna, Gina Curtis, joined Phoenix Panhellenic in 2013 and by Fall of 2014 she had organized an alumnae group and it was officially chartered October 25, 2014. We do not know the charter date of the following Phoenix Panhellenic alumnae group at this time: Alpha Gamma Delta. 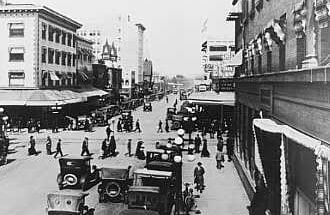